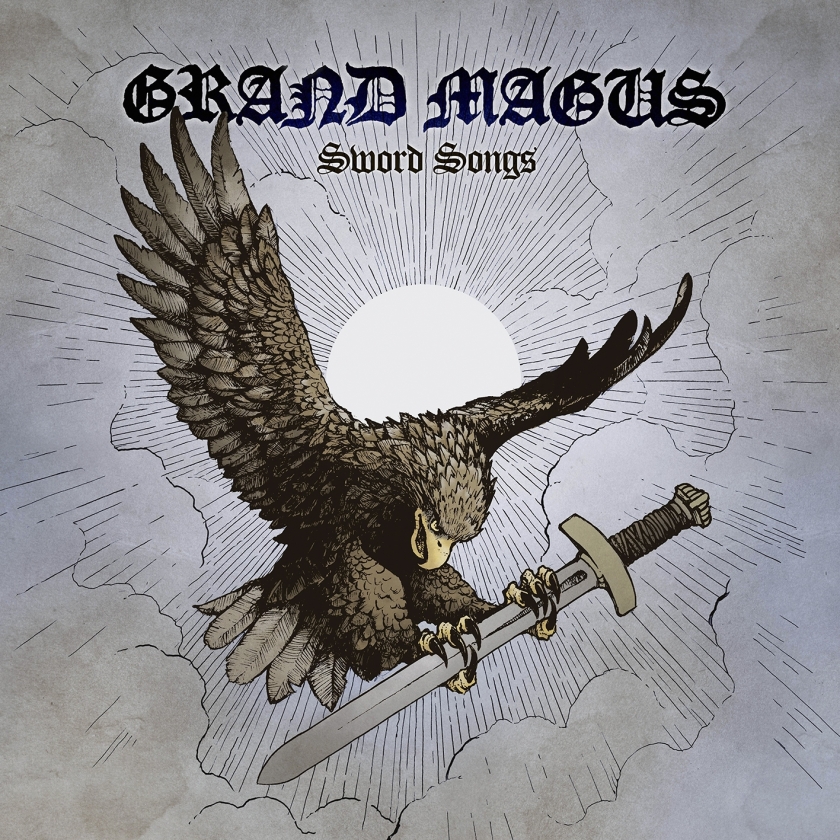 If you’ve clicked on the link to read a review of the latest Grand Magus album that compares and contrasts ‘Sword Songs’ with the seven albums that have gone before it, you may have to search elsewhere. This is because for some reason, the Man Of Much Metal has never before delved into the world of Grand Magus. I’m not the biggest doom metal aficionado in the world and so I just presumed that the Swedes would not be for me. As such, I come to this review colder than a polar bear in a snowstorm.

I know nothing of the history of Grand Magus, I know nothing of their back catalogue and I know nothing of the baggage that surrounds them, namely which of their albums fans think is the best, which is worst and why. However, this ends here and now. Abruptly. You see, I have made a catastrophic error. I only have ‘Sword Songs’ to go on but I’m well and truly smitten, certainly smitten enough to dive headlong into their fifteen years’ worth of material.

It is true that the words ‘doom’ and ‘stoner’ loom large over many descriptions of Grand Magus. However, as I have discovered, the trio of musicians might have begun life in this fashion but are an entirely different beast, offering so much more in the process.

The first thing that gave this album the thumbs up was the title of the opening track. The guys don’t even know me, but to name it after my firstborn daughter, rather than the Norse Goddess, is a lovely touch. They even spelled ‘Freja’ correctly.

But seriously, within a few moments of ‘Freja’s Choice’, it was clear that I was going to very much enjoy this record. In 2016, Grand Magus are what I can only describe as a ‘proper heavy metal band’. They blend classic rock and metal with elements of doom, NOWBHM and power metal to create a properly addictive does of heavy music. It’s the perfect blend of non-nonsense riffing, big choruses and fists-in-the-air sing-along anthems. But then, one look at a front cover that’s adorned with an eagle clutching a broadsword in its talons and you could probably have guessed the content of this record.

In Janne ‘JB’ Christoffersson, Grand Magus are blessed with a vocalist who is just about everything you’d want from a metal front man. His voice is powerful, with a gravelly texture and he actually injects a surprising amount of melody into his delivery. It’s the perfect voice for a set of huge Scandinavian battle hymns. The fact that he then delivers massive riff after riff, as well as the occasional stirring solo means that he is well and truly a force to be reckoned with. I just love the guy’s guitar tone. The melodic leads are authoritative whilst the bottom end is a beefy distortion-fuelled joy.

Behind him are bassist Fox Skinner and drummer Ludwig ‘Ludde’ Witt, both of whom come together to drive the songs forward with power and precision. The drums are nothing short of thunderous and the clarity afforded the bass in the mix means that it rumbles satisfyingly throughout, occasionally coming to the fore and shaking the earth’s core in the process.

‘Sword Songs’ is comprised of nine tracks and weighs in at just over half an hour. That might sound a little on the short side and yes, I’d agree it is. But then no-one ever complained about the length of Slayer’s ‘Reign In Blood’ or At The Gates’ ‘Slaughter Of The Soul’; they’re still lauded as classics in spite of the fact that they’re not endowed with the greatest of lengths. I’m not saying that ‘Sword Songs’ will definitely reach this lofty status but I am saying that this record is chock full of absolutely superb heavy metal that I can’t stop playing.

‘Freja’s Choice’ opens the album in no-nonsense fashion with a huge riff and some drums designed to waken the Norse Gods. It’s an unabashed call to arms that has an early Sabbath vibe in places, meaning that it’s a powerhouse of a song.

You can’t escape the Manowar echoes within ‘Varangian’, thanks to the mid-tempo stomp of the main riff as well as the pomp and sense of the epic that the chorus brings with it. I can imagine this being a huge hit on the live circuits, although truth be told, the same could be said for pretty much the entire album.

‘Forged In Iron – Crowned In Steel’ is a personal favourite. It begins quietly with a hint of Iron Maiden before another killer riff strides in, complete with galloping bass. However, it’s the ‘Viking Metal’ chorus that does it for me. It’s so damn macho that I can feel my beard and chest hair growing faster just by listening to it. Glorious.
‘Master Of The Land’ contains some of the heaviest and best riffs on the entire record, real headbang-inducing fare whereas ‘Last One To Fall’ is slightly faster-paced with a definite power metal sheen to it in the chorus and a churning groove-laden behemoth riff that comes out of nowhere but is almost hypnotic.

There’s barely a weak moment on the record and fittingly ‘Every Day There’s A Battle To Fight’ closes the album in fabulous fashion. Another favourite, it is the closest that Grand Magus get to a ballad but the melodies are just delicious and the guitar tones within the chorus are just about perfect, setting off some kind of primeval response in me.

Above all, what I love most about ‘Sword Songs’ and Grand Magus is the honesty of the music, the sense of fun and enjoyment that comes across in the songs. It would have been easy to allow a few more ‘modern’ metal trappings into their sound but they have remained steadfast against that particular tide. Yes, they may have veered away from their early doom influences but their integrity towards the classic heavy metal ethos is hugely refreshing. If you want to remind yourself of what attracted you to heavy metal in the first place, ‘Sword Songs’ is the place to start.

If you’ve enjoyed this review, check out my others right here: