Today is the penultimate day in my epic labour of love otherwise known as my ‘Album of the Year 2013’ countdown. If you’ve joined the bandwagon late, you can find links to the rest of my Top 20 at the bottom of this post – please feel free to check them out.

But now to my silver metal choice, the album that has taken the Number 2 spot for 2013: 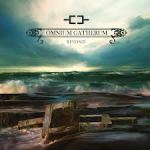 Let’s immediately cut to the chase: Album number six from Finnish melodic death metal band Omnium Gatherum, the simply-titled “Beyond”, is an absolute belter. Had you said to me ten years ago, at the height of my melodic death metal discovery, that Omnium Gatherum would become my favourite band within the genre, I’d never have believed you. In fact, I might have chuckled at the suggestion. However, for my tastes, ‘Beyond’ offers some of the best and most near-perfect melodic death metal that I have ever heard.

“Beyond” takes the melodic death metal blueprint that has been around for a couple of decades now but does something different with it. Instead of exploring a modern edge or overly technical ideas, the Finns have instead blended the crushing death metal with some of the most melodic choruses they can muster. The results are simply stunning and have led to the band themselves referring to their music as ‘adult oriented death metal’. I’d not disagree either because “Beyond” really does sound like a blend of death metal and AOR which really works.

With plenty of great chunky riffs, a powerful rhythm section, an abundance of guitar leads and a properly gruff, almost guttural vocal delivery, ‘Beyond’ should please those looking for some heavy, aggressive metal. And yet, just about every composition is drenched in rich, atmospheric keyboards, resulting in a softening of the edges and a curiously accessible sheen.

This accessibility is then taken to the next level thanks to those choruses. Many of them are so immediate and hook-laden that they genuinely would not be out of place on a classic melodic hard rock or AOR album. Couple the melodies with an occasional foray into clean vocal territory and some positive, uplifting lyrics and that potentially tongue-in-cheek description of ‘adult oriented death metal’ becomes very accurate, hitting the nail squarely on the head.

Done badly, this recipe could have spelled disaster. Crucially however, Omnium Gatherum demonstrate superb song-writing prowess throughout the album, meaning that the songs ebb and flow beautifully and the transition between the juxtaposing styles blends seamlessly. And the recurring motif that ties the opening and closing tracks together is a masterstroke.

I cannot tell you how close this album came to being my number 1 for 2013, it is that good. What else can I say but ‘very well done Omnium Gatherum, very well done indeed’.