Welcome to Day 5 of my Album of the Year 2013 countdown. I’m officially a quarter of the way through and so far, we’ve had prog metal, black metal, melodic doom metal and instrumental rock/metal – if you’re interested in exactly what these albums are, links can be found right here:

But the reason you’re reading this is because you want to find out who has captured the number 16 spot, right? Well, without further ado, here goes: 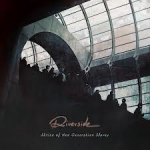 This album was released right at the beginning of 2013. In fact, I was sent a promo copy at the tail end of 2012. Even then, I knew that it would feature in my end of year list, such was its obvious quality and given the sheer amount of times I played it and continue to play it now.

I was a big fan of the Polish progressive rock band’s debut album ‘Out Of Myself’ but since then, whilst the band became ever-successful and received ever more positive reviews, successive albums had led to a decreasing amount of interest from me. I felt that something was missing; that magic from the debut that made it crackle with energy and stand out from the crowd was lacking in my opinion. Not so with ‘Shrine Of New Generation Slaves’.

Right off the bat, this album felt different. From the opening cheeky riff of ‘New Generation Slave’, to the closing acoustic guitar melody of brief closer ‘Coda’, this is an emotive and beautiful progressive rock album that begs to be heard and enjoyed by anyone with a love for this kind of music. The emotion is only heightened by a loose concept that will no doubt strike a chord with many – the fact that many of us hate our lives but lack the time, effort or courage to change things. Powerful sentiments.

It is compositionally however where this album fully excels. With an emphasis on individually strong songs (check out the clever acronym created via the title to this album), each track has something impressive to offer the listener. Accents of electronica (‘Feel Like Falling’) and the use of brass instruments adds variety to the masterfully crafted progressive rock.

And the best bit of all? The track ‘We Got Used To Us’ – sensational.