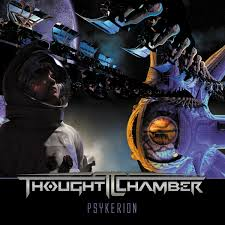 Label: Inside Out Music

Well, well, well. Progressive metal fans should…no, need to take notice of this album because it threatens to be one of the best within the genre in 2013. Why? Read on.

Thought Chamber were originally formed in the mid-naughties by guitarist Michael Harris with their debut album, “Angular Perceptions”, released on Inside Out Music in 2007. Featuring the vocal talents of Ted Leonard (Enchant, Spock’s Beard), that album garnered a lot of praise from progressive circles but everything subsequently went quiet in the American’s camp. Until now, that is. Fast forward some six years and finally, Thought Chamber are back with their sophomore release, entitled “Psykerion”.

Aside from the core duo of Harris and Leonard, the band is a completely different beast as there are new recruits in the drum, bass and keyboard departments. Mike Haid, Jeff Plant and Bill Jenkins (Enchant) have taken up these roles respectively and, to be honest, the quintet has never sounded better. I have the debut album in my collection and I listen to it now and again. I was never truly bowled over by it, preferring to say that I was respectful of it, taking relative enjoyment from it when the need arose. However, it couldn’t be more different this time around.

“Psykerion” is a monster of a progressive metal record from start to finish. Featuring no less than 16 individual tracks, Thought Chamber have gone down the route of creating smaller, more digestible pieces of music rather than long sprawling epics. There are still a few longer compositions, with a couple hitting the eight-minute mark but with a running time of around an hour, the norm is more around the four-to-five-minute mark with a handful of briefer numbers to round things out nicely. Given some of the ideas at play on this album, I for one think it is a great idea to keep the tracks a little on the shorter side. It makes things much more digestible and not as daunting at the outset.

With a family background in jazz music, it is perhaps not surprising to hear that this has rubbed off on Harris and his subsequent song writing. Fusion and jazz ideas litter this album, creating intricate instrumental interludes and tangents throughout. Some of the execution is hugely impressive it has to be said and more than once, I find myself raising an eyebrow or nodding my head in appreciation of the dexterity and the temerity involved in bringing some of these ideas to life.

Importantly however, Thought Chamber have not lost sight of what matters most and they deliver music that is not just technical but that is full of atmosphere, variety and bursting with melodic intent. Jenkins’ keyboard playing is a fantastic mix of stange effects, intricate solos and vast walls of sound, which often creates a slightly futuristic-feeling bedrock upon which all else sits. The bass work is crisp, clear, ballsy and funky and the drumming completes the rhythmic spine intelligently, offering subtle flourishes or more aggressive pounding depending on what the music requires at any given time.

Harris himself is in startling form on the guitar, supplying incisive chops on minute and gentle acoustic refrains the next. Of course there are plenty of big riffs and fast solos, but it is the variety rather than the virtuosity that impresses me most on this record if I’m being completely honest. As with each member, the compositions are never jeopardised in favour of a moment of self-indulgence. It gets close here and there, but then it wouldn’t be prog if the music didn’t flirt dangerously with disaster occasionally.

As always, Leonard puts in a fantastic vocal performance here, adding the melodic and accessible icing on the cake as well as perhaps being the name that attracts potential fans to the cause. On “Psykerion”, he is asked to contribute to a concept that the band themselves refer to as a blend of sci-fi and human drama. As you’d expect, Leonard’s performance conveys the whole thing with aplomb but where he really excels is in managing to convey the humanity within the material. You really feel the character’s emotions, making “Psykerion” an album that you experience, immerse yourself in and emote with rather than simply listen to.

I come now to the bottom line and therefore re-iterate my opening line: Progressive metal fans should…no, need to take notice of this album because it threatens to be one of the best within the genre in 2013. Why? Put as simply as possible, this is modern progressive metal of the very highest order that challenges and rewards in equal measure. And when the album ultimately clicks with you, beware, because it will never let go. Fantastic stuff!

The Score Of Much Metal: